save on your Mortgage

The below 3 case studies are our customers who have recently come to us to handle their Remortgage.

But each of them reduced the interest rate they were paying on their Mortgage.

Our customers names have been removed for Data Protection reasons. But all the reviews have been taken from our public profiles on Vouched For, Google and Facebook.

Customer wanted to reduce his monthly repayment and raise some additional monies to help pay for his Daughters wedding.

As he was increasing his Mortgage, he expected this was going to increase his monthly repayment.

He’d never thought about Remortgaging and always assumed Halifax’s rate was competitive and they would have told him if it wasn’t.

This wasn’t the case and he was unnecessarily paying more each month just in interest to the Mortgage Lender.

I checked his existing Lenders Mortgages as well as new Lenders.

It was considerably cheaper to go to a different Lender.

So not only did the customer get to raise £8,000 on top of his current Mortgage. He also managed to do so and also reduce his repayment by £65 per month. 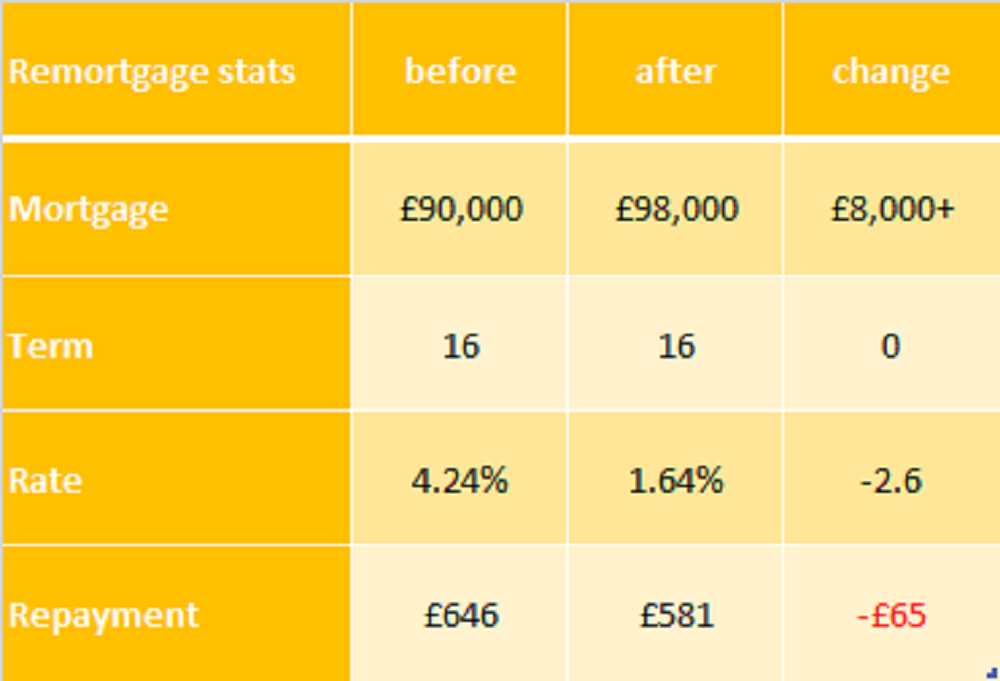 Customer 1's review on our Advice and Service

What were the circumstances that caused you to look for a financial adviser?
To release funds for my daughters and reduce my payments.

How did Luke Spellman help you?
In every way possible his advice was immense first class, took us under his wing.

Have you seen the outcome you were hoping for?
Yes and more, absolutely over the moon.

What could they have done better?
Nothing I really mean that

Customers came to me looking to Remortgage onto a cheaper rate and raise £50,000 to complete an extension.

Customers had some Defaulted Credit Commitments from over 4 years ago registered against their names.

I was able to raise the £50,000 additional monies required on top of the £194,500 already owed, which took the applicants Mortgage up to 90% of their Homes value.

Applicants previous repayment was £1,183 on a fixed rate of 4.78%, due to having previous Adverse Credit.

I secured the applicants a no fee 2.12% fixed rate product with a mainstream Lender. 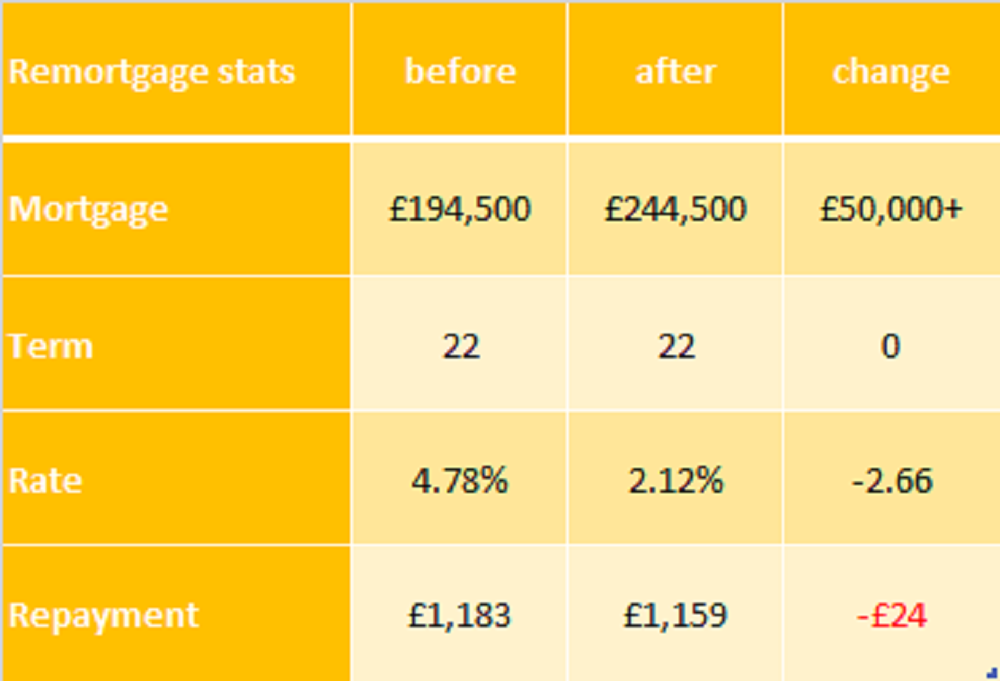 Customer 2's review on our Advice and Service

How did Luke Spellman help you?
When I first spoke with Luke, I wasn’t sure whether I wanted a mortgage or to remortgage and I bombarded him with questions.

Luke was polite and courteous throughout and answered my emails within minutes of receiving them, even on evenings and weekends.

Luke has constantly put my mind at ease and has gone above and beyond to help throughout our application and I won’t hesitate in contacting him again and recommending him to my friends and family.

Have you seen the outcome you were hoping for?
I certainly have.

Customer previously had a 5 year fixed rate Mortgage at 3.49%, which was now coming to an end.

Since they had taken out this Mortgage, interest rates fell further and have remained at record lows for some time.

Their existing repayment was £732 per month over 26 years.

They wanted to bring their repayment down to fit their ideal budget and also reduce their term if possible.

I recommended an interest rate of 1.19% and reduced their term to match their budget. 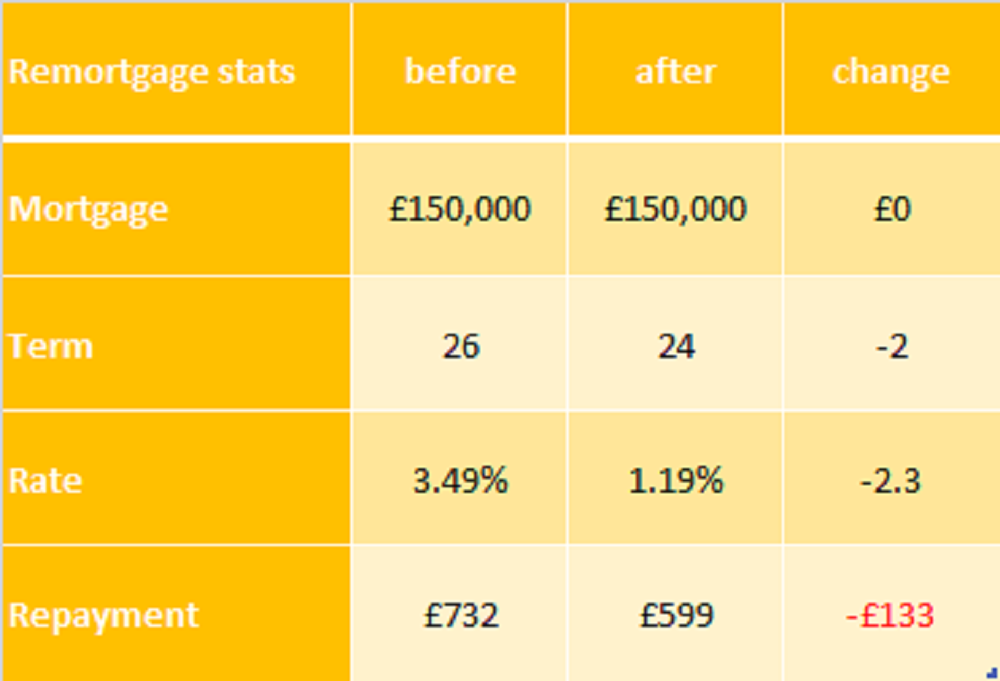 Customer 3's review on our Advice and Service

From start to finish the whole mortgage process ran smoothly.

Nothing was ever too much to ask and Luke was always on hand when ever we needed any technical advice.

Thank you Luke for all of your help!

As demonstrated above, the key reasons to Remortgage are;

To Save Money, raise money and reduce your overall Mortgage term.

How long does a Remortgage take to complete?

If you were to stay with your current Lender. The process can be completed within a day.

If you were to Remortgage to a new Lender. The process can usually be completed within a month or two.

However, we recommend starting the process at least 2-3 months before you wish to complete your Remortgage.

Just in case Mortgage Lender or Solicitor service times are stretched due to high demand.

You can sit back and relax though, as most of this time will be spent behind the scenes by your Mortgage Broker, Mortgage Lender and Free Solicitor.

The Solicitor is appointed by the Lender to complete the Legal transfer from your previous lender to your new.

Interest Rates have been consistently low over the last two years.

If you haven’t reviewed your Mortgage within the last two years, the likelihood is you will be able to get a cheaper Mortgage.

This could be with your existing Mortgage Lender or a new Lender and we will check both for you.

Get in touch below for a free non-obligatory Mortgage quote.

Spellman Financial Services is a Mortgage Brokers in Coventry providing whole of market Mortgage advice to the people of Coventry & Warwickshire.

If you would like any individual advice or further information on any of the above or alternative Mortgage or Insurance Advice.

Please do get in touch and contact us on the below details, to see how we can save you money on your Mortgage.

If you need Expert Mortgage Advice. Please complete the below contact form and we will get in touch within one working day.

The information provided will only be used to contact you and will not be held for marketing purposes.

Spellman Financial Services is an Appointed Representative of Openwork Ltd, which is authorised and regulated by the Financial Conduct Authority